Workplace bullying — what is it? 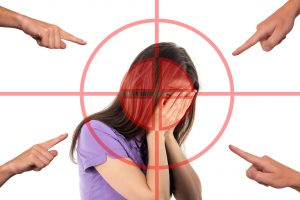 When we think of bullying, we may think of taunting mobs or schoolyard fights, but it looks very different in the workplace. It could the person who constantly criticizes a co-worker, the boss who swears and threatens or the office clique who isolates
and excludes others.

Experts define workplace bullying as a pattern of behaviours that are meant to intimidate, degrade, offend, exclude and humiliate a person or group. It can involve verbal abuse, offensive behaviours, mistreatment and outright sabotage. Malicious rumours and gossip — both online and off — are part of it too, as are making offensive jokes and gestures.

Other examples of bullying include:

– Attacking a co-worker’s skills and competence to undermine their credibility.

– Invading other’s privacy, such as spying, stalking and tampering with personal belongings or equipment.

– Setting others up for failure, like providing misinformation or withholding information necessary for projects or tasks, setting unrealistic deadlines or constantly changing expectations.

– Denying opportunities for training or promotion, or requests for leave.

– Unfair workloads. Some targets have responsibilities taken away from them while others are over burdened with extra work.

– Yelling and using threats and profanity.

Bullies and their targets

So how often does workplace bullying occur? Recent numbers can be tricky to find, but the most recent survey from the Workplace Bullying Institute’s (WBI) reveals some interesting trends. The 2010 Workplace Bullying Survey found that 35 per cent of workers have experienced bullying first hand. That’s four times the number of people who have experienced sexual harassment or discrimination.

Unlike schoolyard stereotypes, the targets of bullies aren’t “loners” or “weaklings”. Instead, they’re integral and valued members of the
team. They’re hard workers, well educated, well liked and successful.

They aren’t rookies either. According to the survey, half of all past and present targets of bullying are between the ages of 30 and 49. Workers between the ages of 50 and 64 are next in line, though the number of incidences could be higher than reported because many people who were targets may have already left the workforce and weren’t included in the poll.

Does sex play a role?
It depends on whom you ask. According to the WBI’s survey, the margin between men and women is slim — nearly 36 per cent of female workers report experiencing bullying compared to 33 per cent of males. However, other studies suggest that men are more likely to become targets than women.

Worst yet, many people who witness bullying are victims too — or become part of the problem. They often fear sticking up for the person and even withdraw friendship and support for fear of becoming the next victim.

What about the perpetrators? Like their younger counterparts, adult bullies are often insecure, have low self-esteem, have poor social skills and lack empathy. Their insecurity leads them to try to cut down and exclude people who pose a threat. Adult bullies also have an agenda of their own and use aggression to get ahead.

It’s not surprising that the majority of bullies are in positions of power. According to the Canada Safety Council, over 70 per cent of bullies are bosses. Co-workers mostly account for the rest and subordinates are rarely bullies — after all, there isn’t much value in bullying someone higher up.

Both men and women are bullies, though surveys don’t necessarily agree on the proportions. Some say men are more likely to be bullies than women, while other surveys claim the opposite. What most findings agree on is that men target both men and women, at almost the same rate, but women target other women in the majority of cases.

However, experts also warn that company culture plays a role in allowing bullying to occur. Most schools have a zero tolerance policy for bullying and procedures to deal with the problem, but employers are lagging far behind. A “tough management style” often isn’t recognized as bullying, and a highly competitive environment can encourage abusive behaviours. Positive consequences like promotions and bonuses reinforce bullying in cutthroat atmospheres, and everyone can get caught up in the culture.

Why is it harmful?

Bullying can have serious psychological and physical effects on individuals. The majority of targets experience stress, anxiety, depression, disrupted sleep and changes in appetite. Workplace stress can literally make people sick, and chronic stress is a known contributor to chronic disease. Many targets of bullying also turn to drugs or alcohol to cope.

The stress also affects relationships with family and friends. The majority of targets never get justice — instead, they face the financial burden of quitting or being fired.

Bullying also hurts businesses as well. The hostile environment damages morale and hampers productivity. Victims of bullying spend between one tenth to half their work time worrying about their situation, defending themselves and seeking support. The stress inevitably leads to costs like employee absenteeism, sick leave, long-term disability and job burnout. The issue can harm customer confidence as
well as the company’s reputation.

Then there’s the issue of employee turnover. Not only do businesses lose valuable workers, they’re also paying out severance packages and bearing the costs of recruiting and training new staff.

The bottom line: it’s an expensive problem. Collectively, bullying, sexual harassment and violence in the workplace can cost countries as much as 3.5 per cent of their GDP, according to a 2001 report commissioned by the International Labour Organization — and that’s not including health care costs.

What can you do about it?

Does this situation sound too familiar? While bullying often leaves people feeling powerless, there are things you can do:

Recognize it for what it is. No, it isn’t just “workplace politics” and it’s not deserved. Many people dismiss workplace bullying or feel the abuse is somehow their fault. Recognizing the problem is the first step to dealing with it.

Learn more about the issue. How you proceed will depend on a few factors, including the laws where you live and what policies and procedures your company may have in place. The laws and policies should explain how to address and resolve the issue, so check there first. Ask around at work, and check your area’s workplace safety websites.

Talk to the bully. If existing laws and procedures aren’t a help, experts suggest talking to the bully directly. Stay calm and factually explain how his or her behaviour is affecting you and the company. Don’t make it personal — stay focussed on the issue and the facts rather than the person. Tell him or her that you want the behaviour to stop. Take along a third person, or write a letter if you feel more comfortable.

Talk to someone higher up the food chain. Address your concerns with your supervisor, or go one step higher if your boss is the perpetrator. Some experts also advise to speak with your human resources department, especially if the behaviour is illegal, but the key is to talk to someone you trust. Many experts recommend finding a mentor who has dealt with the situation before.

Document it. Chances are you’ll need some proof. Make note of what happened and when, how the incident made you feel and how the behaviour is affecting the business. Isolated incidences can be explained away — but a log can reveal relevant patterns.

In addition to your log, keep copies of any correspondence relating to the bullying, including emails, memos, letters and performance reviews.

Keep workplace relationships strong. Bullies want to isolate their targets and edge them out of the picture. Experts advise to resist the urge to withdraw and instead stay connected with your co-workers and clients. Don’t be shy to remind supervisors about your skills and
successes.

Avoid retaliation. While it’s important to stick up for yourself, revenge is not an option. It will likely escalate the situation, and you also risk losing credibility and looking like a bully yourself.

Work on prevention. Stop bullying before it starts. Employers and employees can work together to foster an environment

In addition, if you know someone who affected by workplace bullying, the best thing you can do is listen and offer support. When loved ones don’t believe the bullying is happening or don’t understand the situation, it can increase the target’s stress and sense of isolation.